There’s a theater producer known as the fast food proprietor of summer stock. Ralph Miller. Under this man’s ownership three of his four theaters have – as reported by news sources – suspiciously burnt to the ground. And now the law has caught up with the man…but not for arson. Yet. 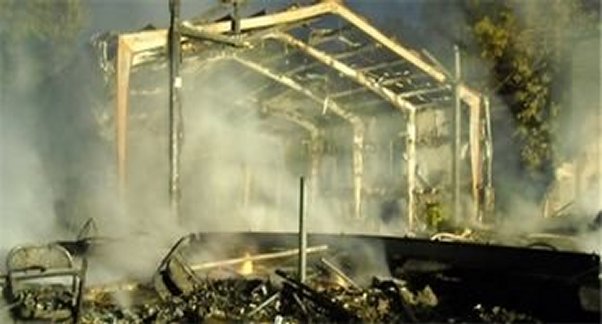 ORIGINAL POST Nov. 29, 2009: Another jewel in the diminishing crown of employ for theater artists has been lost.

He’s had a long and litigious history with AEA, vendors, insurance companies, other producing entities all during which he has filed for several bankruptcies. The man has been producing recycled summer stock for over thirty years and has been in the position of producer during the demise of several historic theatrical houses.

Under this man’s ownership three of his four theaters have – as reported by news sources – suspiciously burnt to the ground.

Each theater now a memory. All once part of the long-ago forgotten Straw Hat circuit. Stages that were the starting places and artistic retreats for many stars and journeymen actors. Each a cathedral to our community gone to cinders.

I recently  learned of Pocono Playhouse’s Oct 2nd, 2009 demise. My journey in the arts as actor included several stops at both Pocono and Falmouth playhouses and the remaining (for now) Bucks County Playhouse.

As reported by the Pocono Record on November 17, 2009 suspicions have been raised to the most recent of Mr. Miller’s destroyed properties:

“Months before the Pocono Playhouse burned down, owner Ralph Miller increased the insurance on the building 25 percent.

With a $1.25 million policy in force and just an $85,000 mortgage on the building, Miller could be in line for a million-dollar payout from the October blaze…

…In the past quarter century, Miller has had a series of run-ins with insurance companies, who have accused him of everything from fraud to arson. He has met their resistance to pay with a litany of lawsuits, claiming his properties have been damaged by fire and rain, lightning and animals — collecting more than $2 million in the process.

Things happen to Miller at an alarming rate. The Times Herald-Record of Middletown, N.Y., has found 10 substantial insurance claims by Miller spanning a 25-year period, and those are merely the ones that resulted in litigation or otherwise ended up in the public record.

“Given the history I see a lot of red flags and issues that would make anyone, any reasonable person, especially in this business, suspicious of these claims,” said David Rioux, an insurance executive and a former police detective and fire inspector. Rioux is president of the International Association of Special Investigation Units, an organization of insurance-fraud investigators.

The red flags he mentioned include financial difficulties (Miller has filed for bankruptcy protection three times) and increasing insurance coverage shortly before a loss (as Miller did with the Pocono Playhouse).

Miller, who has never been charged with any wrongdoing, claims that he’s a victim of bad luck. He said a lender required him to increase coverage on the Pocono Playhouse when he tried to refinance. Miller blamed his lawsuits on miserly insurance companies.

He has collected payouts on three fires that destroyed buildings: a Bucks County, Pa., warehouse in 1984, the Woodstock Playhouse in upstate New York in 1988 and the Falmouth Playhouse in Cape Cod, Mass., in 1994. The Woodstock and Falmouth fires were ruled arson, but no one was charged with setting them. Miller denies responsibility.

After Falmouth burned, however, Mount Hawley Insurance sued Miller, accusing him of having the fire set and of hiding his history of insurance claims from the earlier fires. Mount Hawley eventually agreed to pay a fraction — about $600,000, according to Miller — of the $1,575,000 policy.”

On November 8, 2009 the Pocono Record followed with:

“Pocono Playhouse owner Ralph Miller and a crew burned costumes and sets behind the theater hours before a blaze incinerated the building last month.

“I was there with three or four others — people from the playhouse, burning old sets, lumber we weren’t using anymore,” Miller said.

Miller said it wasn’t unusual for him to burn trash at the playhouse. Barrett Township permits open burning, a common practice in the area.

But a neighbor whose back yard faces the playhouse, and is just feet from the burn pile, remembers things differently.

Michelle Putre said the trash burning stood out for one reason: “It was unusual, because I’ve never seen them burning there before.”

One theater remains to this man. A 1790 grist mill turned to stage in 1939 by New York theatrical luminaries; Bucks County Playhouse. Once proclaimed the State Theater of Pennsylvania now a tarnished name among those who survive present conditions. The former glorified structure is slowly decaying along the banks of the Delaware River in the pastoral village of New Hope, Pennsylvania.

Bucks County Playhouse is the most historic of summer theaters. It was home to Kaufman & Hart; the birth place of many musicals and plays including; Harvey, Barefoot in The Park; a stage graced by the talents of Kim Hunter, Helen Hayes, Kitty Carlisle, Colleen Dewhurst, Shirley Booth, Lillian Gish, June Lockhart, Grace Kelly, Bonnie Franklin, Kaye Ballard, Sandy Dennis, Robert Redford, Paul Lynde, Bert Lahr, Leslie Nielsen, Jack Klugman, Gale Gordon, Roddy McDowell, Walter Matthau, Merv Griffin and Larry Hagman. It was also one of my homes. Not a happy one. But I adore the institution; not the man.

I fear for loosing another jewel in the forgotten crown of employ for theater artists.

Mr. Miller in the past has allegedly tried to remove Bucks County Playhouse from his collection. Speculation was that he would get more than a monetary return on his release.

In the mid-80s he sold both Bucks and Pocono playhouses to a LA producer. According to an unsubstantiated conversation between Mr. Miller and a close associate, Mr. Miller knew that the new producer would regain a contract with AEA for the playhouses (Mr. Miller was sued by the union and lost his agreement) and renovate physical conditions at both. Once a mortgage payment was late, claims the associate, Mr. Miller would retake control of both playhouses. Whether or not a missed payment was the trigger for regaining ownership is unknown. But Mr. Miller did regain the playhouses with renovations and AEA agreements.

There was a fourth theater lost to fire. One that Mr. Miller did not own but was under the leadership of a close friend and former producing partner at Bucks County Playhouse; Richard Akins. In the summer of 1989, Gennetti’s Dinner Theater burnt to the ground. The stage manager reported that he saw a man he did not recognize in the upper reaches of the house. When the stage manager called out to the unknown person the stranger did not answer and ran. Minutes later the inferno began.

Our theaters are our homes away from home. They are our houses of worship. As I’ve written in a new, unpublished manuscript:

“Theater beyond home borders is our working holiday where we indulge, sweat, toil, form new bonds or burn old bridges. A place for both play and profit. Incubators of innovative works and fertile ground for grafting old chestnuts. On a personal level summer stock and regional theater can be cradles for establishing fresh friendships or renewing treasured relationships. Whether it’s a theater, formerly a barn, that resides under tall swaying pines in the Green Mountains of Vermont or is a Broadway provider in the heart of New York City like the Roundabout; each summer stock or regional theater is safe haven for the theater artist. A home away from home.”

We can’t afford to lose any more homes.

The Ralph Miller Time-line (as reported in The Pocono Record):

– While Ralph Miller runs the Bucks County Playhouse in New Hope, Pa., a fire – classified as arson – destroys a nearby building he owns. Miller collects $300,000 in insurance.

– Miller buys the Pocono Playhouse in Mountainhome, Pa., with no money down and a mortgage of $430,000, using the Falmouth Playhouse as collateral.

– Miller buys the Woodstock Playhouse from Harris Gordon for $350,000.

– He closes the Woodstock Playhouse after one unsuccessful season – and failed attempts to sell the theater for $950,000.

– Miller sells the Pocono and Bucks County Playhouses for $3.1 million – but the buyers default on the mortgage and Miller loses $20,000 per month in payments – and regains the theaters.

– A 4:30 a.m. fire – classified as arson – destroys the Woodstock Playhouse. Miller collects $375,000 in insurance. The family that holds the mortgage claims Miller forged Gordon’s signature on the check. Miller says he was authorized. He eventually settles with the family of Harris Gordon by deeding them the playhouse land.

– Settles bankruptcy, must pay $4 million to creditors of $11.5 million owed.

– Miller’s insurance company, Mt. Hawley Insurance, claims Miller “intentionally caused” the fire at Falmouth Playhouse and didn’t notify it of prior fires in Woodstock and Bucks County. It demands a trial.

–  Miller again files for bankruptcy with $7 million in debt and $100,000 in back taxes. Says he may sell the Pocono Playhouse to satisfy taxes.

– Miller abandons the Pocono Playhouse, when back taxes of $230,000 force a sheriff’s sale of the property.

– Miller says he will refinance mortgage to pay taxes and keep Pocono Playhouse.

– August: Miller declares bankruptcy, with $5.8 million in debt – on the day the Bucks County Playhouse is to go to public auction.

– Oct. 2: In a 1 a.m. fire, Pocono Playhouse burns down. An investigation continues.

“The Bureau of Alcohol, Tobacco, Firearms and Explosives, along with state and local Pennsylvania police, is investigating the October 2009 fire that destroyed Pocono Playhouse.

“The Stoneridge Bank of Skippack seized back control of the Bucks County Playhouse after no bids for the property materialized at this morning’s sheriff sale.

Ralph Miller, controversial owner of the New Hope landmark, said yesterday that he was relinquishing ownership of the property.

Miller has been running the theater since 1977, and owed the Stonebridge Bank more than $2 million.”

Ralph Miller, the former longtime owner of the historic Bucks County Playhouse was found guilty by a federal jury of claiming more than $200,000 in fraudulent insurance payments after a 2006 flood devastated the property. Miller could face up to 30 years in prison for convictions on counts of money laundering and mail fraud, said Assistant U.S. Attorney K.T. Newton.

The theater now operates under new ownership which renovated and rejuvenated the property, and brings in top talent.