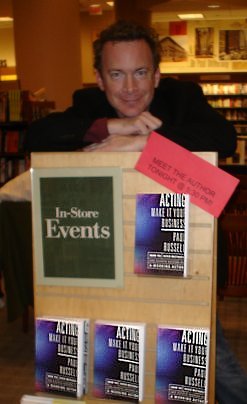 The following is a true story. No actors, agents or animals were physically harmed during the debacle.

Bruised egos are another story…

I was recently sitting in the office of a talent agency doing what I do when I take a break from work. Write about work.

As my digits were drubbing the keys of my HP with Windows Vista (grrrrr) I overheard one of the agents next to me call out to an assistant;

“Make sure you put in the cover letter that he got an M.F.A. from NYU. Because [casting director’s name withheld] is snobby.”

Prior to this the agent had received a phone call from a new client who was fresh out of school. The actor had heard — through the thorny thicket that is the actor-grapevine —   that [well-known director’s name withheld] was casting a major production of a language play and that final auditions would be held the following day. The actor requested the agent push the casting director for an appointment.

O.K. All systems normal. Until…

Chutzpah we have a problem.

Once the push had been made the agent called the actor to inform him that she had requested — on his behalf – he be squeezed into the schedule for an audition. An audition, if granted, that would occur the very next day. Of which the actor, you’ll recall, was very aware of when he requested the push.

Unfortunately the actor had a sudden case of amnesia (which came over him in less than ten minutes). He balked to his agent that if he got the audition he would not go in because,“I wouldn’t have enough time to prepare.”

Excuse me? Did he just nod off from reality?

An argument between actor and agent ensued. That’s when my fingers stopped. My ears (blog-material-seeking-whores they are) heard an opportunity for keystroke tapping.

I listened as the agent reminded the newly minted client that it was he who had requested the push while knowing the audition would be the next day. The actor would not relent and remained resolved informing the agent he would not go in for the audition if the casting director (who is a tough-to-convince buyer) welcomed the actor to read for the industry-respected director.

That’s when the relationship-guillotine-blade began it’s ascent in what was surely to be a bloody business demise for the belligerent actor.

The agent warned the actor, “I don’t like the way this relationship is developing between us. This is not something I’m comfortable with.”

After a few more back-n-forth exchanges during which the actor still registered his intent to reject an appointment for the next day (if it were presented) the conversation ended without pleasantries. One could almost imagine hearing the swoosh of the sharp blade as it slid down la guillotine to severe service of agent to actor. But there was a momentary reprieve.

The agent turned to me for my reaction. Before she spoke I, as an observer, simply said, “Drop him.”

The agent then called the actor’s manager and related what had just transpired. The manager revealed that they too had been having similar problems with this actor. This was not the first rumblings of trouble between actor and talent rep. Prior; another agency dropped this same actor for bad behavior. It was then the manager who had to sell the damaged goods to another agency and hope for the best. Now that problems were happening again, and within just two weeks of being at this new agency, the manager unknowingly agreed with my observation and promptly then-and-there dropped the actor. The agency followed in kind.

Now you may think this to be odd, rare, extreme, or a happens-not-too-often scenario of bad actor behavior. It’s not.

I know not why some actors decide to commit professional suicide. And while performing hara-kiri, profusely put forth that they are in the right for their actions and the rest of the world is wrong. I could go into lengthy analyses of personality disorders. But the life-clock is ticking and I need my morning muffin.

The best answer for the actor’s actions detailed prior (and others like him) may simply be – and in short – stupidity.

NEW FEATURE!: Finally!! WordPress has made it possible for you to get each post delivered directly to you via e-mail. You subscribe using the feature in the upper right hand corner of this post. (If you see nothing in the corner that means you have to go to the original Answers For Actors page @ https://answersforactors.wordpress.com/)

Your email remains private! We do not have access to your address via this feature. So sign-up so you don’t miss a post. The actors who do subscribe… they’re ahead of the game and moving forward.

1.If you have to “right-click” to see the graphic in your email, a sometimes annoying extra-step, you have to alter your email program or browser settings, i.e. Outlook, Internet Explorer, etc., to automatically show the graphic.

2. Graphics are also usually auto-blocked by your antivirus/spam protection software, and you need to add the email source to your “safe senders” list. This is a better safer choice and allows you to make change per individual email source.