If you know me; taken my classes; read this blog; or have my book; you know that I strongly urge every actor to have a web site. (Facebook and the desert that is MySpace don’t count; nor does a lone page on a casting service site. Get a web site.)

A reader recently asked of me:

“I’m working with a designer to create a website and I’m stumbling on something.  After some discussion, she and I agree that ‘open spaces,’ is a part of who I am–e.g., adventurous, pragmatic, no nonsense, outdoorsy… she advocates a background image that suggests all this.  I worry that it seems ‘too arbitrary.’  I’ve been pushing to seek out imagery more directly theater-related… Do you find such background art distracting, or an interesting or helpful cue as to whom you’re thinking about buying, when you’re looking at my site?”

I took a look at the various mock-ups of the actor’s site and provided my reaction; some of which I’ll share here: 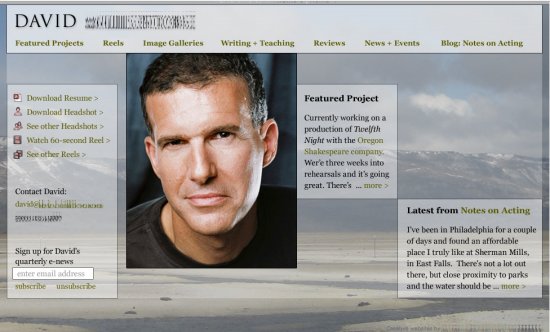 My reaction? Is he an actor or a mountain guide? 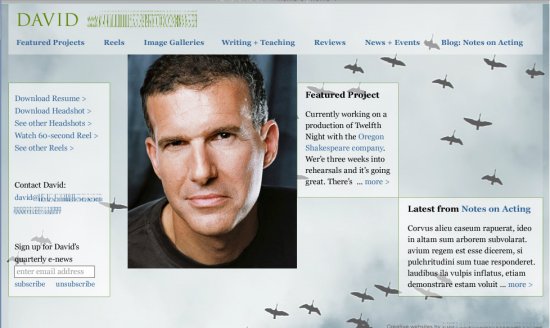 Tippi Hedren anyone? (And if you don’t know who that is, shame on you as an actor. And no I’m not giving you the answer.)

None-the-less the birds have to go. Preferably far, far, south and never to return. 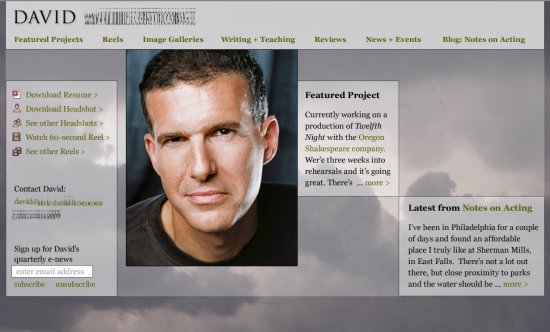 Now while I’m immediately reminded of religious overtones, angels descending from the heavens and late-night televangelists hawking dinner plate sets with ‘”Life-like, hand-painted scenes from The Last Super!”; this one is the best of the three. Though not the optimal choice.

The background for your web site which represents your work as an actor should be subtle and not confuse the message of your occupation which is your product. The background should also be minimal.

As to a theater or entertainment industry related background; you don’t want to go with cliché. Save that crap for the clip-art laden actor sites of the ’90s and strip mall acting studios.

Sow what background did David choose? Well, after some correspondence (and yes, he’s very aware of this post) David sent me a mock up choice he was leaning towards. Whether or not he will choose it; that’s still to be seen. But what is below puts the focus on him and not the background. It’s a better marketing choice (albeit the haunting voice I hear singing from somewhere ‘Empty Chairs at Empty Tables’): 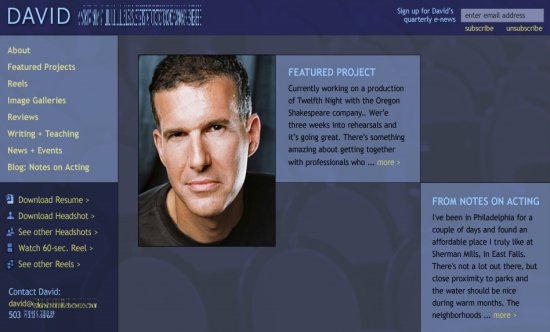 If not done already go get yourself on the web because when directors, producers, agents and casting look for actors that have been recommended to them. Where’s the first place we go? Google. And you had better have a professional-looking web site that ranks within the first three to five results.

Now, if wondering what content and pages are the most marketing effective on your web site? I’ve already written that. In my book ACTING: Make It Your Business. I try not to repeat material here. Or re-heat left overs more than once.