Did a profane playwright suggest to NYU-Tisch acting students to lie on their resumes by creating false credits?

Did a well-known playwright celebrated for buffaloing text with curses suggest to NYU-Tisch acting students to lie and create false resume credits? I hope the speedy plowman of dialogue, who honors the four-letter word as much as I, didn’t f**k with the emerging artists’ minds by encouraging falsified work history.

As told to me by a collective group of NYU students, allegedly the profane playwright suggested misrepresentation on the resume. Being that this startling information came to me second-hand I assume that the playwright’s comments were misconstrued and/or taken out of context. But… if the black belt of f-bombs did instruct the impressionable young admirers to lie, fib, stroke, misrepresent…someday when those students are in an audition room they potentially must answer an awkward inquiry about a falsified credit on the resume. Only then will they quickly learn what it is to be fornicated by the anarchist of American theater.

While casting at an open call I read the resume of an actress standing before me. My name as director was married to a past credit. Yes, I directed the production. Yes, it was at the theater listed. No, she didn’t play the lead role as her resume indicated. Nor was she cast as the understudy or in the ensemble. Possibly she was an usher? I don’t know. But if someone suggested to her she lie on her resume, where was that adviser instructing her how to skillfully handle that very uncomfortable and unfortunate moment of ‘gotcha?’

An actress wrote me that a past agent of hers instructed she lie on her resume creating false film credits. Allegedly the agent asserted to the actress that doing so would help the agent get the actress seen for TV and film projects. The actress inserted on her resume a friend’s basement-budget home movie. (The actress has since left ill-advising agent. Smart move.)

In the first years of my acting career when ignorance, insecurity, and youth blinded me from making productive, honest choices I foolishly created a resume falsehood regarding my education. I was embarrassed for not having a secondary arts education. But shame is no excuse for an untruth. When work continually kept coming my guilt and growing maturity forced the fib from my resume. I felt freed from my nagging conscious once I obliterated the deceit. And I never, ever, embellished again. Nor should you. Have more respect for yourself. 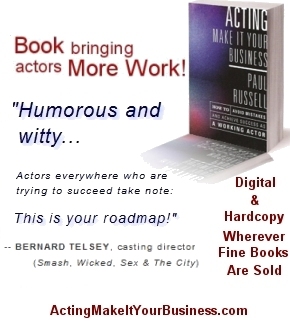 When any of us create falsehoods the damage done is not in the moment of ‘gothcha’ as like when the actress with a resume lie baring my name sheepishly stood before me. No, it’s your self-esteem that suffers a near-fatal blow. Lies like honesty cannot be permanently erased. Like the pictographs on cave walls etched millennia ago, a trace will remain. Somewhere. Or with someone. Most prominently with your conscious.

Be better to yourself. Be honest. We all begin with a blank page. Best to keep the page clean than mar it with falsehoods.