Without your ever knowing… you may have auditioned for me. I saw you but you didn’t see me.

Without your ever knowing I may have sought your talents but you shunned my interest and so I moved onto to another actor/actress.

How are both or either possible you wonder?

The Internet is where much of the modern casting process begins for a number of casting personnel. Talent agents, directors (and occasionally producers) also surf online like casting directors seeking something that every actor must have for career momentum. What is it? Think you know the easy answer? Could it be….; a website?

Bzzzt! Wrong answer, thanks for playing. (But a website is mandatory if you’re to be considered a serious business actor who is a true professional in all aspects of your craft; i.e. talent, marketing, and training.)

The correct answer to what casting directors like myself along with directors and talent agents are seeking when searching online for talent is…: the actor’s online media.

Economics are forcing casting directors to forgo live pre-screen auditions because our clients (producers) are curtailing casting budgets. Thankfully technology allows anyone nearly anywhere on this globe to upload digital media of themselves to an online server. A boon to bypass casting budget restraints of holding live pre-screen auditions (full chapter on this type and other auditions like pilots  in ACTING: Make It Your Business). And producers who control our purse string now know this and will not go back to old cash burning ways of allowing casting to hold oodles of live pre-screens. So now casting must explore talent that is unfamiliar to us by not traipsing into a costly audition studio but by going online to see what an actor has representing them out in the electronic ether.

The first points of such exploration by a casting office, like mine, when seeking your recorded talents online without your knowledge, often follow the order below:

Facebook (Personally I’ll begrudgingly relent to Zuckerberg’s constantly changing online carnival when desperate because the actor I seek has been inept and/or lazy at providing their own online offerings.)

For my office; that’s the order and limit. (The first three choices are nearly tied for first priority of our digital pursuit of you.)

If I want to see just your picture and resume my first stop is Actors Access.

If I want to explore more of your talent offerings (i.e. act and/or sing) my next step is YouTube. If after entering your name in the ‘Search’ field there are zero returns I’ll move onto Google and hope (as I irritably poke and punish my laptop’s keys in frustration towards an actor’s avoidance for digital marketing) that you have a website.

But there remain generations of agoraphobic-like actors — Baby-Boomers to Millennials — who stubbornly abandon digital self-advocacy. The stubborn sloths remain mired in the antiquated, pound-the-pavement mindset of… “If I just keep dozing while waiting in 6 AM open calls lines I’ll be a stah-ar one day.” (Barf bag, please.)

You’re a business. Recorded digital media online of one’s trade is a supportive business tool. If you feel that having such a valuable tool in your arsenal of being an actor is:

A. Too much work

… do yourself a favor and tumble out of the f-ing audition line right now. You’re not a smart business actor. You’re a shyster fooling only yourself.

On one recent project in which agents submitted their clients, and actors submitted themselves, I perused through the nearly one thousand delivered pictures and resumes (hard copy and digital). When I culled the actors I already knew from those submissions — who I believed right for the project — I offered them an appointment. I was left with a precious dozen empty slots in my live auditions for the creative team. I went back to the actors I had an interest in but did not know. I then went online seeking recorded media of those actors in performance.

Actors who I found easily online who had digital media representing them, and their talents matched what I sought; they got appointments.

Actors who I could not find anything representing them online (not even a website); received absolutely no consideration for an appointment. Yes, I had their picture and resume. But they had nothing online like their peers to support the P&R.

And for one actor on this project he’ll never know how close he came to an appointment but failed because he was not a good business actor.

On a dark morning as I readied myself to go into New York for the day of live auditions I received from the producer-client a forwarded e-mail from an actress. She was scheduled to come into the auditions but asked if her boyfriend could be seen. The call was mine.

I had fifteen minutes to jump into my Honda and drive to the train that would take me into the day’s auditions. But before doing so I wanted to check on this actor. Did he have online media? A website?

I first went to Actors Access. My fingers typed his name into the search field. The web page refreshed. The message returned? ‘No matches found.’

I then quickly Googled the actor’s name. Several results returned but none of which were a website for said actor. Just his name attached to cast lists and reviews. No help there.

I tried YouTube, Google videos, Vimeo (why the hell am I doing so much god damned work for one f-ing actor who is being un-actorly and hiding his face?!?!?!) No results returned.

My train would arrive soon several traffic lights and school bus stops away.

Yes, the actor had a profile.

No information of his work other than ‘Occupation: Actor’.

No links to media.  (But if I’d the time I could investigate further on his wall his postings about what last night’s enchiladas had done to his bowels. I, like he, moved on.)

The actor did not get an appointment. He did not have himself represented digitally online.

What an opportunity missed. Not just my audition but the opportunity for the actor to have his work online working for while he slept, showered, did his survival job or was waiting in line at an EPA for the next TV star Broadway vehicle of which no roles (not even understudies) are avail.

Have a website with reels or demos of your work? I’m a captive audience hoping you have the solution to my casting puzzle.

Your digital media can be any or all of the following:

Your reel (No more than three minutes… would you watch five minutes of me typing??)

Be a smart business actor. Have yourself represented online with digital media of your work/skill set.

And puh-leeze… have that media be better than what one misguided ‘actress’ who sent me: Her, alone on her bed, singing a capella Defying Gravity.

(Oh sweetie… you ain’t even defying that JC Penney bedspread.) 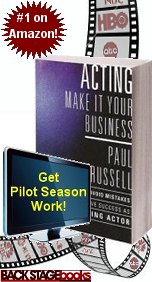 Side Note: FREE subscriber to Answers for Actors? If not, then you’re not getting Answers for Actors delivered directly to your in-box. Each new post (once every two weeks) gets you industry info. I and my office do not view your e-mail address when you subscribe (the techno-elves do all that).  We just know you’re on-board and happily sharing in your journey. To subscribe for free use one of the subscription services either in the upper left corner (the plus sign ‘follow’ in the black band) or the gray ‘Follow Answers For Actors’ button to the lower right.