Actors have lost auditions and jobs because of e-mail.

On recent Paul Russell Casting projects I deliberately engaged in a digital experiment. My office, when reaching out to unrepresented actors, sought electronic submissions only. The result? Devastating for the techno-addicted thespians. 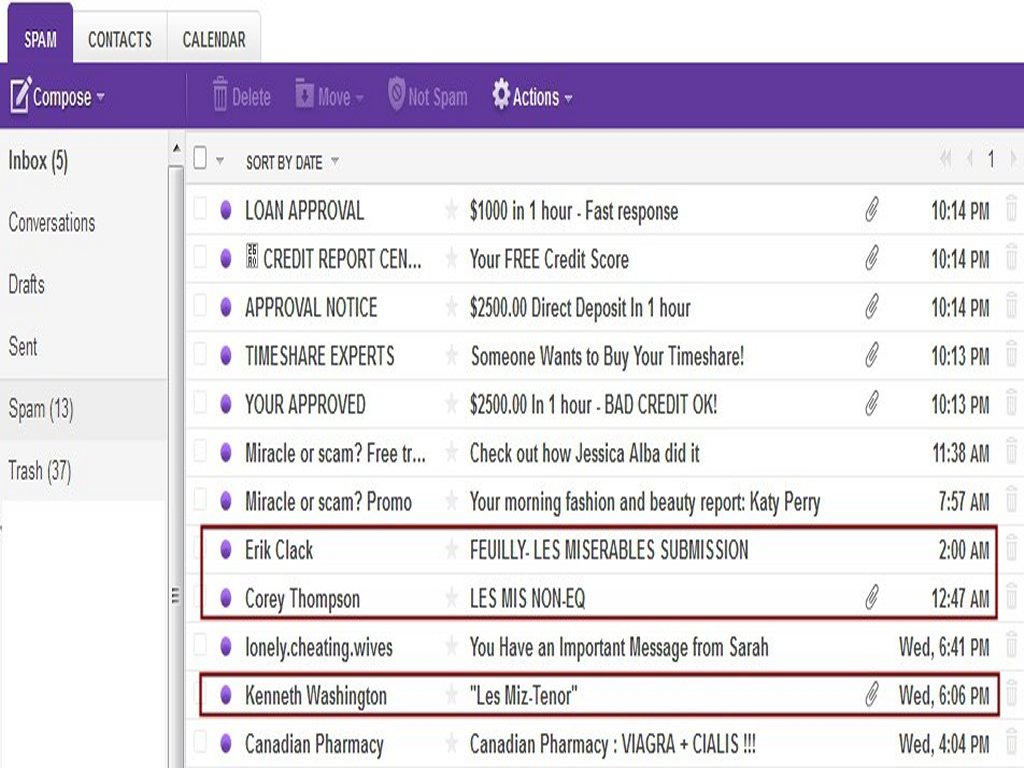 Actors have lost auditions and jobs due to e-mail.

On recent Paul Russell Casting projects I deliberately engaged in a digital experiment. My office, when reaching out to unrepresented actors, sought electronic submissions only. The result? Devastating for the techno-addicted thespians.

What happened? Some startling surprises:

The algorithms of PRC’s public e-mail address server tossed—as junk—numerous incoming e-mails by the hundreds which contained the project’s
title and/or role(s) sought. Yahoo (which my office has abandoned)

programs its server to divert multiple incoming inquiries in which the text of each e-mail contains repeated words and/or phrases shared by more than one e-mail. Yahoo, Gmail, Hotmail, AOL and other public e-mail servers also divert e-mails from unknown senders which contain large attachments. And so, the actors I actively sought were banished to spam.

Only because of my interest in this digital experiment was I aware of what was happening. Another casting director (or a talent rep.) would have deleted with a single mouse click the long digital list of actors unjustly intermingled into the spam with the ads for sex aides and phishing scams.

This was the more shocking…

Gmail, Yahoo, Hotmail and AOL have also tossed e-mails from my office to recipients with whom I’ve had past electronic correspondence because the e-mails sent to associates contained identical text in each e-mail: “audition,” “appointment,” “call-back,” and alike. These e-mails were not mass marketing materials. I was corresponding with requested information.

Why does this happen more than previously noticed? E-mail delivery is at the unmerciful whim of Silicon Valley techno-geek programmers who set algorithms deciding for you the delivery priority of your digital communications to your targets. E-mail platforms are becoming more stringent as to what and who can contact you. Overzealous algorithms now block desired dialogue; lumping your e-mails for seeking work with erectile dysfunction medication pitches.

You get what you pay for. ‘Free’ e-mail does not equal assured delivery. Alternative or communication subsidiary? The U.S.P.S. delivers to a brick and mortar mailbox never to a spam folder.

My office returned to actively seeking land mail submissions and calling out appointments via the phone. Too many actor have ignored land mail as an additional tool in their outreach. Some shortsighted actors whine that sending land mail takes too much time, effort, plus a dollar and spare change. To which I answer, you will receive in return what you pay for, which more than likely will be nothing.

Don’t forgo older technology in order to save miniscule cha-ching.

dollars with their marketing investment. Successful businesses (actors are each an individual business) know that to reach their target consumer (casting and/or talent representation) multiple outreach platforms must be engaged.

As the owner of your business which is you; don’t rely on e-mail as your only outreach to your consumers. Diversify to multiply opportunity.