‘No’ to actors can become a ‘Yes.’ But actors place a ‘No’ in their own path before the ‘Yes’ arrives from casting and/or representation. How does an actor ensure they don’t place a boulder before them blocking an oncoming ‘Yes?’ 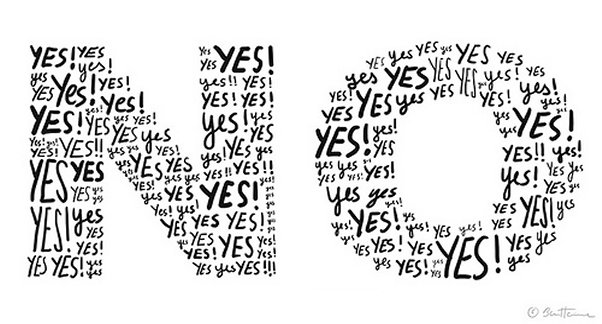 A ‘No’ to actors from casting, talent representation, and entertainment industry gatekeepers is often a ‘Yes.’ But the actor deliberately–without self-awareness–rejects the gatekeeper’s silent ‘Yes’ by placing a roadblock in their own path before that ‘Yes’ roars towards them.

Actors may do due diligence to creating open pathways by making the rounds of auditions-by-appointments, open calls, EPAs or ECCs but discover there’s no immediate welcome to their efforts: no contract; no gig. Actors also may market diligently to casting and agents but the only correspondence littering the actor’s inbox are spam proposals from supposedly single Russians seeking a profit. Too often actors wrongly believe no one is hearing their artistic wants. The actor who gets only silence in return to outreach efforts places faith in the phantoms haunting the darker corners of their insecurity.

Actors are being heard, and welcomed by entertainment industry’s chin dippers signaling a ‘Yes.’ The actor doesn’t know the gate has been unlatched because the actor judges a ‘Yes’ to their talent only comes in three forms: a job offer, representation, or applause (the latter being the fuel that powers the likes of Donald Trump).

How Actors Unknowingly Reject a ‘Yes’:

It’s no secret I peruse actor land mail at talent agencies. I seek the actors who short-shortsightedly ignore sending updates to casting offices. On occasion I’ll contact actors nabbing my attention within the agency slush piles. Recently one actor wrote me back:

“Thanks so much for the encouragement. To be honest, things have been a bit tough lately (for everyone, I imagine), particularly finding representation. As you saw, I did do a mailing, but I haven’t heard anything.”

We should hope that the actor’s comment, “I haven’t heard anything” doesn’t carry the career stalling subtext of, “Since that mailing didn’t get me an agent I’ll probably give up on doing another mailing.” (By-the-by, did you notice that the actor above didn’t acknowledge that this casting director and director discovered the actor’s marketing materials? He retreated to the negative “Woe is me” and overlooked the positive “Some gatekeeper I didn’t send my materials to read them and responded to me favorably.”)

How to Receive a ‘Yes’ from Silence:

As an actor, part of the actor’s ownership in their business includes active investment and engagement in a marketing department of their own devices. An effective and intuitive marketer’s goal is firstly not to nab an instantaneous response from the consumer. A marketer’s goal is to bring, or heighten, awareness of the brand (or product) to the consumer. The more informed the consumer is of an offering the more favorable the consumer’s reaction towards a sale on the next approach. Marketing and advertising (which are not to be confused as being the same instrument of consumer outreach) isn’t solely for generating impulse buys. The heralding of goods and services is an investment towards generating brand awareness.

Realizing Your Brand Awareness is Effective:

Early in my career I bemoaned to my partner of what I perceived as non-yielding debits after an elephant-sized investment of time and expense with my outreach to producers. Despondency knifed my morale when immediate responses never materialized. Weeks of marketing and no returns. But my wise partner-in-life always reassured me, “You say this all the time. And like clock-work you hear back from someone six months or a year later.” He’s correct.

In my outreach for teaching masterclasses at universities I keep in contact with numerous acting programs that have yet to invite me to their campuses. And every year I hear from acting programs that didn’t respond to my prior marketing efforts. Last semester I added two universities to my collegiate family. I continue building brand awareness in various forms beyond the banal, “Hey! I’m still here!” I share valuable entertainment industry information to department chairs, professors, and most importantly to the program’s actors whether or not I’ve visited their campus. Repeat awareness of a brand in differing formats and messages to your consumers is Marketing 101.

A marketing actor shouldn’t expect an immediate favorable response to each audition, or marketing outreach. Expect that the targets (representation, casting, and directors) of your brand are getting to know you equally as you’re getting to know your consumers. The more a consumer sees what a brand has to offer the more confident the buyer is in future considerations of your product.

Actor Who Received a ‘Yes’ from What was Believed to be a ‘No’:

My clients (directors and producers) and I possess digital folders with the resumes of actors seen at auditions—actors favored but yet-to-be-hired. Eventually from those files a number of the actors are (and have been) hired for a future project without the actor doing a future submission process. A project that neither we behind the casting table or the actor knew existed back when the actor attended an unrelated audition for my client(s) and myself. Similarly, a talent representative may have an interest for what an unrepresented actor has to offer. But unknown to the actor, variables keep the agent and/or manager silent on their interest in the actor.

How 1 Actress Nearly Torpedoed Her Career by Ignoring a Silent ‘Yes’:

Once agent-less Broadway and screen actress Darrie Lawrence kept in contact with numerous agents including an agency owner of a prominent bi-coastal agency that represented Samuel Jackson, Edie Falco, Angela Bassett and other name-recognizable talent. Then Lawrence made a marketing mistake that put her career in peril.

Lawrence ceased her correspondence to the agent—she became distracted by work achieved on her own. But contracts were not always forthcoming. There would be weeks of tuna sandwiches. Years later after her initial contact with the powerhouse agency owner Lawrence literally bumped into him on the street. He recognized her and remarked, “I never heard from you again. I wanted to rep you. I assumed that you found an agent.” Shortly thereafter the duo began a professional actor-agent relationship. Had circumstances not collided Lawrence and the agent Lawrence’s career might be markedly lesser, and the frequency of tuna sandwiches greater.

An actor seeking attention screams into the actor maelstrom of “Hey! Look at me!” With no return siren to their pleas the actor assumes their voice is whooshed over by the gales of desperation wailed by fellow actors. Often actors are heard. They’re just not aware of the ‘how’ or ‘when’ their targeted industry gatekeepers are malleable.

Actors too often seek instant gratification from their outreach be it an email or a land mail campaign, or attending open auditions. These scenarios are opportunities, not solutions. Each audition, every mailing, is one more penny in the fountain of your career. Once the fountain’s pool glimmers full with coins, the rewards are collected.